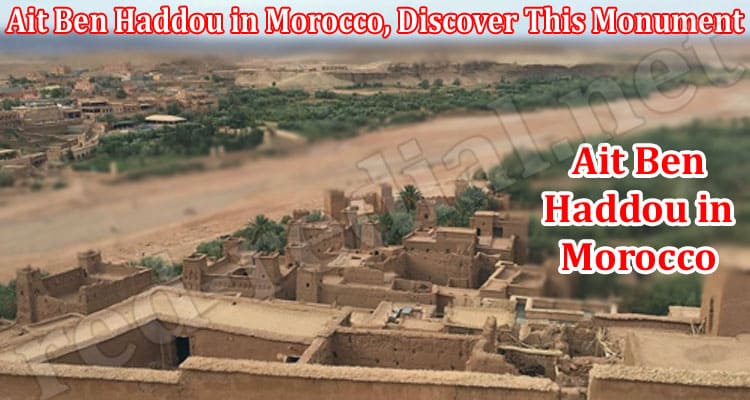 Ait Ben Haddou is undoubtedly the most famous kasbah in Morocco , near the city of Ouarzazate in the heart of the Atlas, the most important mountain range in Morocco.

The Ait Ben Haddou Kasbah is a fortified red brick citadel with corner towers. Its typical color is due to the materials used for the construction: a mix of straw, mud and stones. Inside there are houses, common areas and other buildings such as a mosque, stables, granaries and, today, shops and shops. Here, even if it doesn’t seem like it, families still live.

As soon as you arrive in the parking lot you will notice a little further on the Ait Ben Haddou kasbah on a hill; to reach it you will have to cross the now dry bed of the Ounilla river .

Try to visit the kasbah early in the morning or in the evening before sunset , when the hordes of tourists traveling in groups have not yet arrived or have already left. I can tell you that I visited Ait Ben Haddou meeting only 3-4 tourists on the streets; the experience was therefore much more suggestive and authentic, one of the most beautiful of my Private tours in Morocco. Even if you certainly notice the tourist imprint of the place, it is nice to be able to walk in peace and admire the buildings, courtyards, houses and chat with the craftsmenwho manage the shops and stores. A guy who sold jewelry and various clothes invited me to sit inside his shop and offer me some tea. We talked, he told me a little about the history of the kasbah and his family; as well as with a big smile he welcomed me one of the gentlemen who works in a workshop that produces carpets. Contrary to what happens in a city like Merzouga desert camp, here the two shopkeepers did not insist that I buy something and they chatted with me with a smile, without necessarily expecting something in return.

In your aimless wanderings, I recommend that you climb to the top, until you reach the ruins of an agadir (fortified granary) from which to admire the panorama of the surrounding desert landscape .

The visit to Ait Ben Haddou is free , there are no tickets to buy; although you may find someone who will ask you for 10 dirhams at the entrance for some elusive renovation of the city.

If Ait Ben Haddou is still well preserved and has managed to recover the appearance it had roughly during the 11th century, when it was a popular almoravid caravanserai, it is also thanks to film investments. In fact, since the 1950s, the Moroccan kasbah has been the set of numerous important films ; just to name a few: Lawrence of Arabia , Jesus of Nazareth , Indiana Jones , Cleopatra , The Gladiator , Alexander , Prince of Persia and, among the last , Game of Thrones .

As I had already told you in the post dedicated to the locations of the TV series , the kasbah of Ait Ben Haddou was none other than Yunkai , one of the cities of the Bay of the slavers freed by Daenerys.

How to get to Ait Ben Haddou

To get to Ait Ben Haddou from Marrakech by car , take the N9 road that cuts the Atlas, through the Tizi-n-Tichka pass (2260 meters). Following this road you begin to descend towards Ouarzazate until you reach Tazentoute, here you will have to turn at a detour indicated by the signs; in a few minutes you will have reached Ait Ben Haddou.

From Marrakech to Ait Ben Haddou by car it takes about 3 and a half hours .

If you have not rented a car and prefer to move by public transport, as I did, you will have to take a bus ( CTM company ) in Marrakech towards Ouarzazate. This time the journey will be a bit longer, about 4 and a half hours; but don’t worry, the journey across the Atlas is really beautiful. And a stop at a typical Moroccan “Autogrill” with meat hanging in plain sight and freshly squeezed orange juice is also included!

Once in the city you can take a private taxi or a grand taxi, to share with other travelers (Ait Ben Haddou is about 32 km from Ouarzazate). I took a private taxi from Ouarzazate that accompanied me all day, during which I visited: Ait Ben Haddou, the Atlas Studios and the oasis of Fint. It was a beautiful day of discovery, thanks also to the very nice and kind taxi driver I was lucky enough to find; despite some communication problems, we talked a lot: he told me about his family, his work, letting me discover stories and anecdotes from his life in Ouarzazate.

I hope I have clarified your ideas on how to visit Ait Ben Haddou , otherwise, as always, you can write me in the comments!