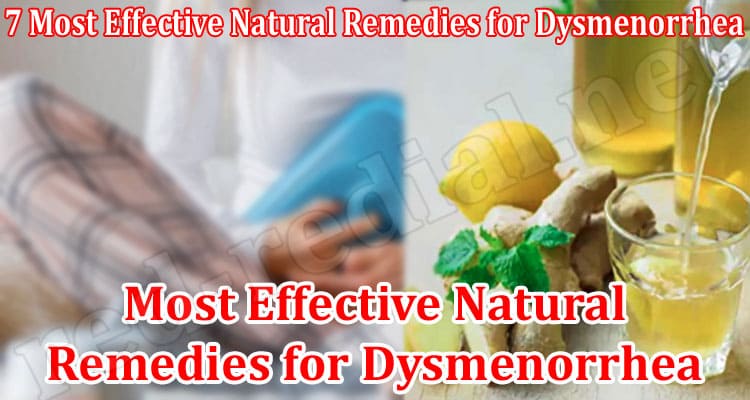 Natural Remedies for Dysmenorrhea : Period discomfort affects a substantial percentage of women who menstruate for one to two days each month. When your uterus contracts to lose its lining, also known as the uterine lining, menstrual cramps occur. This might result in the stomach, lower back, pelvic, and upper thigh pain. Dysmenorrhea is the medical term used to describe the pain caused due to uterine contractions during menstruation. However, the good news is that dysmenorrhea can be treated and one doesn’t need to rely on painkillers for the same.

While many people are used to popping pills for pain relief, it comes with a long list of side effects that range from mild to severe. Instead, several natural remedies (such as CBD oil in India) can help the body relax and reduce pain.

Natural and safe remedies for Dysmenorrhea

While it is true that a painkiller is probably your best bet when it comes to combating the discomfort and pain caused due to dysmenorrhea, we all know that it is not the safest way. Moreover, relying heavily on painkillers can cause a range of side effects, such as dizziness, headaches, stomach ulcers, and even kidney damage. This is not to say that painkillers should be completely avoided. It’s just that they should not be taken unless necessary. Instead, there are several natural remedies that are known to work wonders for most people. Some of the most effective ones are listed hereunder.

In several studies, ginger extract has been shown to alleviate the symptoms of dysmenorrhea, such as painful periods. Ginger tea has been shown to help relieve stomach cramps during the first few days of your period when menstrual cramps are most common. Because ginger inhibits the formation of inflammatory molecules like prostaglandins, it helps to reduce inflammation. Ginger may also help to alleviate nausea that sometimes accompanies menstrual cramps. Ginger can be consumed before, during, and after your period. Period pain can be easily relieved with a cup of relaxing ginger tea. You can also add other ingredients such as lemon and honey to this.

Curcumin, a compound found in the turmeric root, may help alleviate PMS symptoms. According to studies, curcumin’s therapeutic components have been shown to reduce PMS symptoms and pain by combating inflammation and altering neurotransmitter levels. Curcumin has been shown to treat PMS-related behavioural, psychological, and physical symptoms. Curcumin may be beneficial to patients suffering from inflammatory illnesses such as osteoarthritis, gastritis, autoimmune diseases, and other ailments. If you already have turmeric in your diet, you don’t need additional curcumin supplements. Combining turmeric with black pepper enhances the absorption of curcumin.

Certain vitamin deficiencies can actually aggravate your symptoms. This is where supplements can be immensely helpful. Several studies have shown that supplements like vitamin B1 and fish oil can help to relieve pain and discomfort. A combination of vitamin B1 and fish oil has also been shown to reduce the symptoms of dysmenorrhea. Dysmenorrhea causes painful cramps by causing the uterus to contract. Prostaglandin production is reduced by vitamin D. In one trial, large weekly doses of supplemental vitamin D dramatically reduced pain severity in young women with primary dysmenorrhea and low vitamin D levels. Women who took vitamin D took fewer pain relievers during their periods. If you suffer from painful periods, consider getting your vitamin D levels checked.

In addition, supplements like Omega-3, vitamin E, and magnesium can help reduce inflammation and may even make your periods less uncomfortable. Cannabidiol oil in India is another highly effective anti-inflammatory supplement. Moreover, since certain supplements are likely to interfere with medications, consult your doctor before beginning any new supplement routine.

Calcium is one of the most important minerals. Still, most women do not get enough calcium from their diet. This also explains why joint pains and conditions like osteoporosis are more common in women. Calcium is required not only for strong bones, but also for normal heart, muscle, and neurological system function. Calcium supplementation may also help relieve menstrual cramps. In a study of young women, those who took a calcium supplement had less extreme menstrual pain than those who took a placebo. To receive your daily dose of calcium, you should rely more on natural dietary sources such as dairy and meat. However, you can also take supplements in case there’s a deficiency.

To ease cramping and other unpleasant menstrual symptoms, you can use nonsteroidal anti-inflammatories and painkillers. However, NSAIDs can have unwanted side effects and may not be effective if you experience severe cramps. CBD oil is a better alternative for controlling period pain. Since CBD oil is now readily available in India, it can be an effective substitute for over-the-counter painkillers. Those who use CBD oil swear by its effectiveness.

While there is no data on menstruation and cannabidiol oil in India, women with severe dysmenorrhea and endometriosis regard CBD oil as the most effective pain reliever when compared to other treatments. Additionally, topical CBD may help relieve severe period cramps and other unpleasant symptoms, such as headaches. According to some research, THC and CBD work best together, so if you’re looking for cannabidiol oil in India to aid with menstrual discomfort, go for a full-spectrum CBD oil.

This drop is due to the significant amounts of antioxidants and plant compounds found in plant diets, which aid in good physiological function. There’s a link between what you eat and how much oestrogen your body produces. Animal products and added oils raise oestrogen levels in the body. The more oestrogen-containing foods you eat, the more likely your uterine lining may thicken unnaturally. As a result, as it begins to break down throughout the menstrual cycle, more prostaglandins are produced, resulting in increased pain levels.

In addition to these remedies, you also need to ensure that you get adequate sleep. Regular physical activity also helps to relieve period cramps, in addition to a healthy lifestyle. Even light exercise, such as yoga, releases endorphins, which make you joyful, relieve pain, and relax your muscles. Some habits, such as smoking and excessive drinking, tend to aggravate the symptoms of dysmenorrhea, as does an unhealthy diet.

Natural remedies work like a charm when it comes to overcoming mild to moderate discomfort. Moreover, supplements such as CBD oil in India are now readily available and that should help you avoid taking painkillers for period cramps. In fact, CBD oil also prevents PMS from flaring up, which is not the case with NSAIDs. Menstrual cramps are a common symptom before and during a period. While mild cramps are common, it is not normal to experience severe cramps that interfere with your everyday life. If these remedies do not work in relieving menstrual cramps, it is important to consult a doctor to detect and treat any underlying causes.