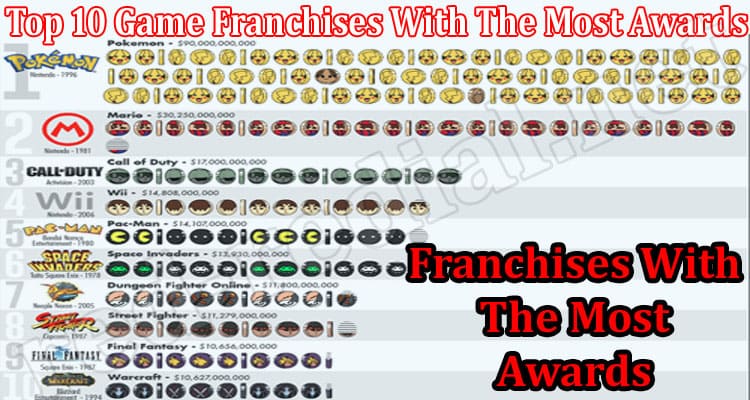 Top 10 Game Franchises With The Most Awards: Just like any other industry, the gaming industry has introduced its own series of awards to acknowledge and appreciate the amount of work, planning, and innovations that the game developers have put into a game for the world to see. Developing a game is a long journey that requires so much work and dedication, it could take anywhere from one person doing everything to thousand people getting every little detail right.

We have seen franchises grow from nothing to the absolute best through years of hard work and meticulous planning. Now, It’s been a while since we last talked about game awards, so today we are going to talk about the top 10 game franchises that have racked up the most awards!

Couch co-op games hold a unique identity in the gaming world for their innovative designs and challenging gameplays that keep the players hooked. We have all played many couch co-op games in our gaming lives but It Takes Two is by far one of the best games. And don’t just take my word for it, the game has received a staggering number of GOTy awards, 47 to be more precise.

The game is still pretty popular and if you haven’t played it yet, you definitely should find out exactly why so many people love it. You can buy It Takes Two for around $5.

There’s no surprise that Resident Evil Village has made it to the list of games with the highest number of awards because Resident Evil has been one of, if not THE BEST horror survival titles of all time with intense action, challenging gameplay, and breath-taking visuals. Taking the reins after Resident Evil 7, Village continues to dominate the genre just like its predecessor.

The game has won around 40 GOTY awards from different media outlets and readers’ choice. It still remains one of the best choices for gamers who are looking to dive into this genre.

Death and Loop are two things combined to create a vicious cycle of constant struggle as the player tries to take out 8 targets before the day turns into night and everything starts all over again. The game is a fine combination of intense first-person shooter and supernatural setting with tons of features from parkour to deadly guns.

Deathloop might not be as popular as the other many other games on this list but it sure has bagged a lot of awards since its release. And to put that in counting, it tops over 25.

How can we ever forget one of the best rogue-like dungeon crawlers of all time? With overwhelmingly positive reviews from players and some critics, Hades remains a great choice for rogue-like lovers who love to explore things on their own. From the art style to the combat system, the game offers everything that you could wish for and more.

Hades has bagged a ton of awards from major gaming platforms, media outlets, and readers’ choices. To put things into perspective Hades landed at number 3 for the most game of the year awards.

There’s no way you didn’t see this coming, I mean Grand Theft Auto has been one of THE MOST popular series of all time. Rockstar has proven to be unbeatable in the gaming world with every new title and that’s only fair seeing how much effort, time, money, and resources the developers have to put in to make the game perfect!

We can only expect the next-in-line entry to the series to be just as good as the other ones. So far, the Grand Theft Auto series has bagged 9 BAFTA awards and I am pretty sure that’s not gonna end anytime soon.

There is no doubt that Dragon Quest is one of the genre-defining games that gave birth to a lot of good JRPGs that many of us have dedicated our lives to nowadays. The game has won several awards over the years since its release all the way back in the 80s when games were still in their infancy. Dragon Quest also holds the record for the most Famitsu Grand Prizes in the gaming market.

The trend still continues with the latest entry in the long-running series-winning game of the year and a number of other awards including Golden joystick awards and Gamer’s choice awards. Dragon Quest continues to grow stronger with every new title coming out. If you haven’t played any of the games in the series, I think it’s time to give it a go.

Forza has been the go-to racing game series for millions of racing game lovers out there and for the very right reasons as well. It’s only grown better and stronger over the years, with new content, exotic vehicles, and of course, insane maps to keep the players hooked for hours of fun and thrill. Speaking of the latest entry, Forza Horizon 5 has bagged around 22 awards from some of the biggest names in the industry.

The Legend of Zelda

Of course, we all remember the game that has been an inspiration for MANY games out there. The Legend of Zelda is a genre-defining game that has created history for so many reasons, be it the gameplay, narrative, story, or even the visuals, everything was spot on and that’s not only me, the game has received an overwhelmingly high Metascore of 95 out of 100 of Metacritic. That says a lot about how good the game actually is and it has also claimed a lot of awards over the years as well.

Developed by Sucker Punch Productions, Ghost of Tsushima took the whole world by surprise with a blast of an entry. The 2020 action-adventure title became this new big thing in the gaming world racking up millions of fans in no time. The game features a rather different story and an environment with gorgeous visuals and perhaps that’s why it’s been able to bag so many awards.

According to the data so far, Ghost of Tsushima has won a total of 74 awards, out of which 60 from the media outlets and 14 reader’s choice awards, and quite rightly so. And that’s just from the release year 2020, still a long way to go!

The Last of Us

If gore-filled epic execution styles don’t thrill you, I don’t know what would. And if they do, well, what better way to get your heart pumping other than zombie shooters. The Last of Us has made a name for itself as this insanely thrilling and addicting post-apocalyptic game that has won the most game of the year awards.

The latest entry to the game continues on the path of glory set by the predecessor, winning 3 BAFTA awards and making it a total of 10 for the series so far. Besides that, The Last of Us has also won a number of different awards from IGN, Games Radar, Game Informer, and many more.