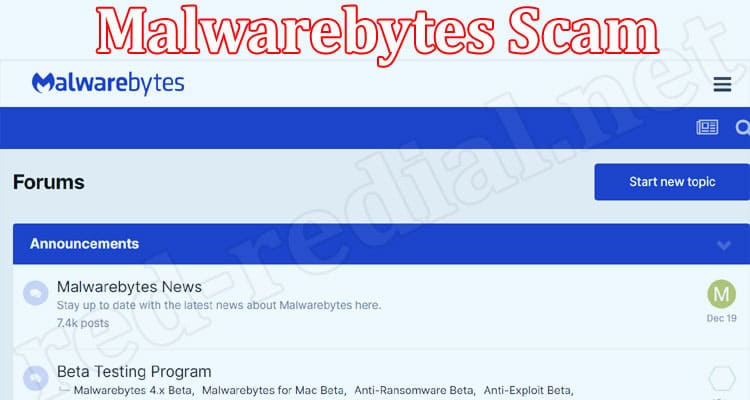 Read exclusive reviews unavailable elsewhere about Malwarebytes Scam. Also, learn the plot of the scam and its aim.

Malwarebytes is an anti-malware software developer which was established in 2006. Malwarebytes provides a free and paid version of their anti-malware application which supports Windows OS, iOS, Android, and Chrome OS. The free version has to be manually run. At the same time, the paid version runs automatically, provides better features, etc.

Did you know the paid version can be renewed automatically, which also gave rise to Malwarebytes Scam in the United States? Let’s learn more.

The scammers plotted a Malwarebytes renewal scam. Under this plan, the scammer sends an email to Malwarebytes customers, informing them that their account is charged a high dollar amount towards auto-renewal. Such emails are a scam as they target installing unauthorized software on your device.

There were four types of messages exposed by Malwarebytes. One of the emails misspelled Malwarebytes as Malware bytes and informed the users that a subscription for five devices is renewed for $560.92. The email provided a customer service phone number. The five-device subscription actually costs $79.99 yearly. Hence, the email creates urgency and panic in the customer.

The second email format sends a table with the invoice number and date and says that $549.99 is charged towards renewal. The third format of email thanks the customer for purchasing Malwarebytes. It gave the invoice details and informed them that $312.38 was charged to their account.

Likewise, the fourth email informs customers that Malwarebytes membership will get renewed on a particular date in the feature. Hence, there will be a charge of $394 plus $5 taxes. All four emails included a phone number to contact Malwarebytes customer service.

How does Malwarebytes Scam work?

Once the customer calls the scammer’s number, the scammer offers assistance and requests to take remote control of the user’s device. Malwarebytes found that the scammers install a software name SupRemo on user devices, which allows the scammers to connect remotely to the user device without user authorization.

Malwarebytes Scam also revealed that the racket is run from Delhi, India. Once the scammer connects with your device remotely, he can view all the activities you perform on your device, including making payments. SupRemo also allows scammers to operate your device, giving them access to your files, camera, etc.