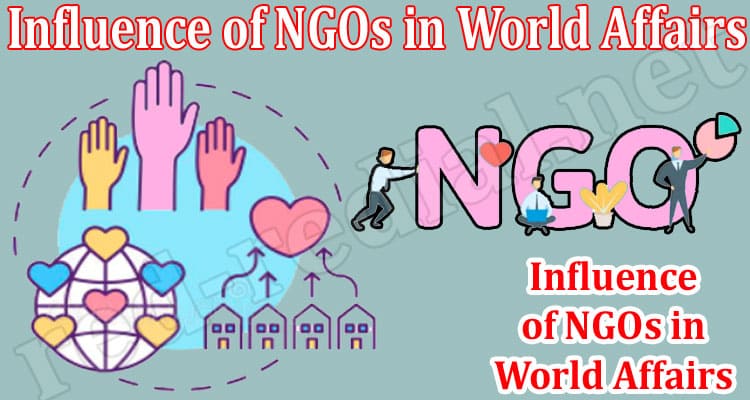 Hope the article Influence of NGO’s in World Affairs has shed some light on the work of the NGOs as a part of international affairs.

A Nongovernmental Organization(NGO) is an entity that operates independently without any government intervention with management. The main motto of establishing such groups is to resolve social and political issues. The entity is classified into operational NGO and Advocacy NGO by the World Bank. The operational teams take the framework and execution of developmental projects, whereas advocacy groups spread awareness about a specific cause and defend it. From the shared brief notes, it is clear that ordinary people are at the benefit as NGOs thrive in social welfare. Are you interested in the Influence of NGOs in World Affairs? If yes, read on to know more.

These teams are also referred to as civil societies. The impact of these bodies on and with international relations is remarkable. Philanthropy and international development include the service aids provided by the NGOs. They are non-profit as per the definition. However, they sometimes own budgets of a few million each year. Some of their funding sources are private donations, sale of services and goods, grants, and government contributions associated with membership dues. It is a known fact these social welfare teams render aid independent of government; however, some civil societies depend on government funding too.

Influence of NGOs in World Affairs

Health services: NGOs have a crucial role in times of humanitarian emergencies. They work with the UN agencies and fight against epidemics, mortality rates, and malnutrition issues. As all civil societies are not trained in healthcare services, they seek assistance from UN agencies like World Health Organization (WHO), UNICEF, UNHCR, and Pan American Health Organization. NGOs are the first actors when it comes to the collection of data, program proposals, and surveillance systems. They also partner with international communities to implement health programs and funding initiatives in times of human need.

Food and Nutrition: NGOs involve the world food program and the UN agencies. A few political ideologists perceive hunger as a tool to achieve their agendas. However, NGOs take charge of feeding the needy whenever necessary as they are aware of the significance of food aid in emergencies. They are also seen in contact with specific government sectors or UN agencies in food aid service. Also, as the rendering of goods requires money, NGOs seek help from governments and UN agencies if needed. Civil societies are known for their kindness in organizing feeding centers to treat severely malnourished individuals and people with other medical conditions.

Protection: The social groups take the responsibility to request the western governments, UN agencies, and the new media to end violent events like wars, genocide, systematic rapes, and massacres to protect the human population. The word protection here implies observation and simultaneous reporting of harmful agendas to the journalist for the public welfare. In a few cases, the NGOs hire lawyers for the victims of abusers. However, it must be noted that they do not enter the battalion field to fight physically but either request to stop violent activities or render aid to affected individuals through food, medical, and shelter facilities.

Emergency response: The NGOs address any kind of activity that causes catastrophic damage to the human population. The incident could be a civil war, a significant poverty situation, or a natural disaster. Civil societies assist in developing society’s health infrastructure, education system, local infrastructure, and political capacity building in the poorer regions or parts affected by disastrous conditions in the world. They hold the necessary tools, knowledge base, and facilities to prevent situations from worsening.

In short, civil societies offer food aid, report unwanted events to the appropriate bodies, and send necessary aid for the betterment of society. The Influence of NGO’s in World Affairs is significant as it involves international authorities only for the public welfare.

Do you beg to differ? Why or why not? Drop the answers in the comment box.

Also Read :- How Will Blockchain Change the World