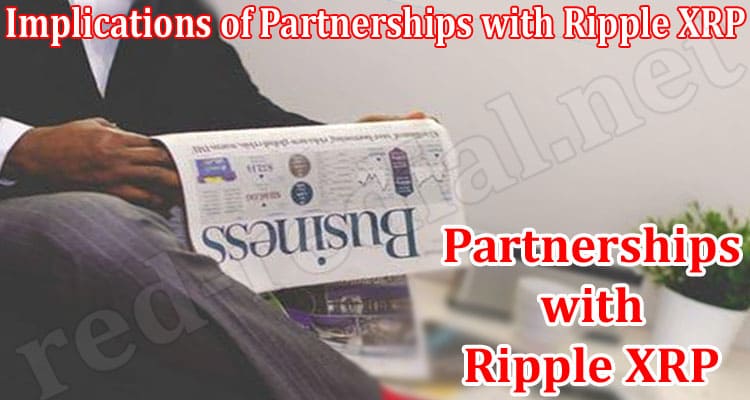 Implications of Partnerships with Ripple XRP: Ripple can be explained as a network that is designed with an intention of money transfer to serve a wide financial jurisdiction. The cryptocurrency that operates under this network is what is referred to as an XRP, which has since its inception been listed among the top ten cryptocurrencies by the measure of the quantity of market capitalization.

In determination to progress cross-border payment systems, banks all over the world are now actively embracing the use of Ripple blockchain. Though it had faced a series of lawsuits from the US securities exchange, its reputation remain unshaken. From our cryptocurrency overview, it has exhibited a series of multiple growth and development. So, you can buy cryptocurrency using your debit or credit card without any hesitation.

In recent years, a lot of banks are signing memorandums of understanding with Ripple XRP, and this has proven to be the most progressive site at present.

This software works by helping reduce the cost of cross-border payments by lowering settlements. This is important to banks since it helps them stand out from others and increase their customer base. This software for it to work efficiently is installed in the company infrastructure. The API interface is used, and it helps with the translation of traditional payment message formats and compressing them into weeks.

This mainly deals with minimizing the liquidity cost to financial institutions, thus making sure that the customer experience has been greatly improved.

xVia is for companies, payment providers, and banks that need to direct payments across various networks using a standard interface. If you are wondering how to buy Ripple (XRP) — Changelly is your perfect plug.

Some of the Biggest Banks Are In Partnership with Ripple XRP

This is a multinational that has existed for a long time. It has various branches all over the world, and a memorandum of understanding with Ripple XRP has seen it expand its wings further. The first time it made a transaction with Ripple was back in 2016 and clearly, they have enjoyed security in payments. They started their journey in 2016 when they ventured into XCurrent, but with time they expanded their borders to exchange cryptocurrency and started dealing with XRP. The biggest step to be witnessed was in 2018 when, to control the India-Singapore corridor, they tapped into $15 billion.

With over 25 years of operating in the United States, Hong Kong, and Mexico, this bank also made its move to partner with Ripple. Officially, it began its partnership in October 2017. The advantages that members of this bank enjoy include credit and payment solutions and custom-made products to fit their needs regardless of the geographical location. Instantaneous settlement and end-to-end payment tracking are among the advantages members enjoy. In 2018 the bank implemented the use of xRapid which saw a reduction in the cost of sending cross-border payments between us and Mexico.

Its first-ever collaboration with Ripple can be dated back to March 2018. The first actions were done privately and nobody came to know of their alliance. With a huge capitalization in the market and many subsidiaries’ branches, its integration with Ripple was called for. It saw that its members could enjoy a wide variety of services and the best part is that it could be custom-made, hence convenient to customers irrespective of their location.

PNC’s worth is stated to be 6.0 USA/EN billion dollars in deposits. Its official allegiance with Ripple was in 2016. The main intention behind the alliance was to utilize the blockchain Ripple to deal with cross-border payments since they had proven to be very efficient. PNC had a great customer base estimated at eight million customers which saw it work in codependent roles with each other. The xCurrent that was adopted in November 2018 saw the process of payments being greatly reduced.

The implementation of Ripples and transaction turnover time has been reduced to 4 to five seconds. Imagine having to do a transaction to a different country and the entire process just takes a few seconds. This is a huge development, all thanks to the Ripple net. A typical wire transfer takes days for it to reflect the account, the same challenge is the same with bitcoin.

The fees involved in this type of account are normally very minimal as compared to other methods.

Huge banks have signed a memorandum of understanding with Ripple, hence it is a very credible place to trade in.