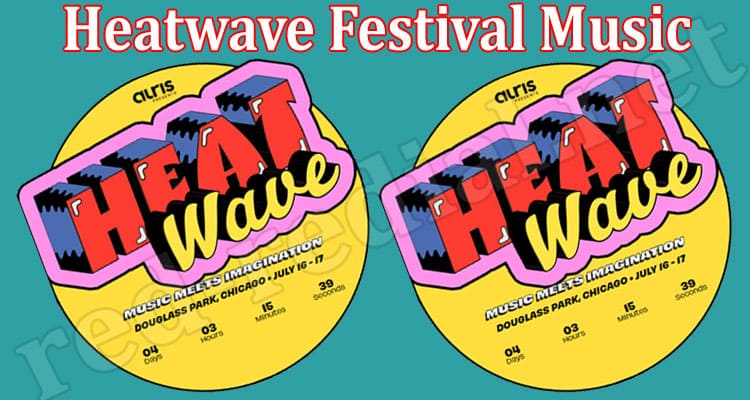 The article will discuss the timing, location, lineup, and more regarding the Heatwave Festival Music, an event completely infused with pop art.

Have you attended any music festivals? Have you heard of Heatwave Music Festival?

Heatwave Music Festival is the newest entry in a field of music festivals that is becoming increasingly crowded. Heatwave is a music fest and artistic event fundamentally inspired by the vibrant sensibilities of the legendary 1950s pop art period. It will take place in Douglas Park in Chicago city of United States. Read the following article to know more about Heatwave Festival Music.

What is Heatwave Music Festival?

Heatwave Festival is an event with a pop-art theme that combines performances of the best dance music in the world with interactive art. It aims for a memorable debut in the home of dance music, Chicago. Auris Presents, a Chicago-based promoter, is leading the charge to turn Heatwave into Chicago’s next big hit. The crew undoubtedly has the experience and longevity to back it up as the trendsetters behind some of the city’s most popular venues.

The Heatwave has an extraordinary lineup of artists from many musical genres, an event devoted to electronic music. “Endless Summer” set of Sam Feldt and Jonas Blue, who take on the stage on July 17, will be an absolute highlight as the prime festival season gets underway. It is one very innovative sequential performance that organizers have incorporated to tap further into the freewheeling sunny mood.

Heatwave is determined to make a statement, featuring artists such as Tiesto, Above & Beyond, plus Oliver Heldens, as well as the edgy and innovative sounds of G-Jones, Westend, and Matoma.

Heatwave Festival Music: How To Reach There

Heatwave will offer three distinctive settings influenced by the most well-known pop art for a music-meets-art panorama of exhibits and places to explore. The event will be held in Douglass Park in Chicago, Illinois, at 1401 S Sacramento Dr. Goers are highly encouraged to use substitute means of transportation since there is a finite amount of available parking at the venue.

Those choosing to take public transportation may easily stroll to the event grounds because there are multiple lines run by the California & Ogden/Douglass Park intersection. You can take Bus 18, 94, or 157 to reach the Heatwave Festival Music arena.

This article discussed the Heatwave Music Festival, which will debut this weekend on July 16. We discussed the festival and the crew to ensure it becomes a huge hit among people. We also saw the timing, transportation, and other necessary details related to Heatwave. We also looked at some of the artists who are going to perform at this two-day music festival. To read know more about the festival, click on

Also Read :- What Is Revolve Festival Vs Coachella {April} Explore!